PIG HEART TRANSPLANT - For Mass Consumption CD is out now 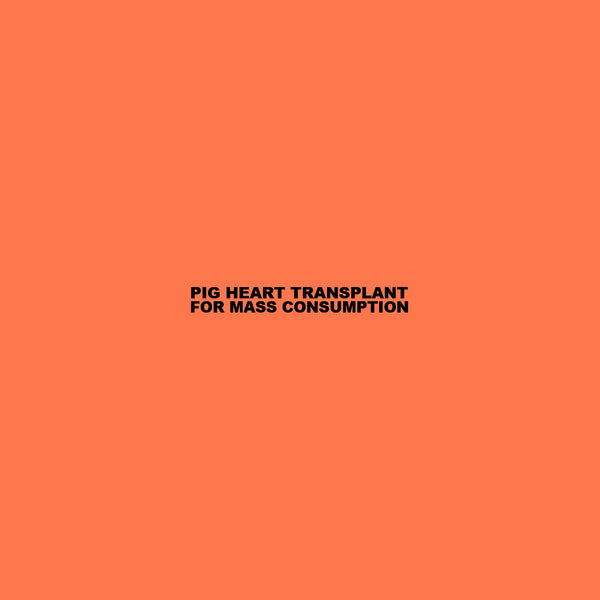 LP and CS out in October on ILR. You can buy the CD from 20 Buck Spin right now!

PIG HEART TRANSPLANT - For Mass Consumption LP/CS (LUNGS-059) & CD (SPIN066)
Pig Heart Transplant is the alter ego of Jon Kortland, one half of the men that comprise the surgical Powerviolence duo Iron Lung. Like Iron Lung, Pig Heart Transplant delivers both a vicious beating and violent outcome, however the operating methodology is an entirely different animal; slow, churning, industrial, electronic, painfully percussive, a bureaucratic nightmare of State Power with gears grinding the individual into a hallow shell, perfectly molded into one of Them. This is 1984.
For Mass Consumption is composed of 28 tracks, each approximately 44 seconds long, each song title a 4 letter word, structured in a perfectly palatable way for optimum group adoption and mindless adherence to common purpose. Electronic manipulation, no wave guitar noise, abrasive hammering and eerie synthetic ambience imbue the listener with the seedy malaise of manipulation on a societal scale. One might recognize the pulverizing brutality of early Swans on tracks like ‘Film’ or ‘Pigs’, the pulsing throb of Brighter Death Now and IRM on ‘Coma’ or even Robert McNaugton’s soundtrack work for Henry: Portrait Of Serial Killer on ‘1970’ or ‘1980’.
Without doubt a horrifying work of aural terror, For Mass Consumption is the logical result of a culture bent on banal conformity and the futile struggle against its domination. Iron Lung Records (LP and Cassette versions) is pleased to bring this tormented future vision into the present in collaboration with 20 Buck Spin (CD version).
Posted by El Presidente at 8:20 AM Links to this post