For better or worse we took the time to compile a list of our favorite things that came out this year. All of these bands are a cut above and worthy of complete respect. 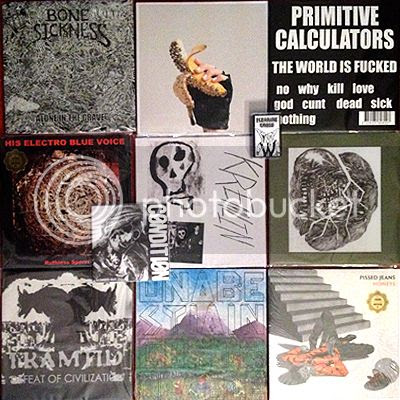 UNA BÈSTIA INCONTROLABLE - Observant Com El Mon Es Destrueix LP - La Vida Es Un Mus
-This is the record of the year for us. So much goes on that seems to slip by unnoticed by most. UBI's got it all and we caught it early. Fuck yes! Heavy, distorted, anthemic, industrial, inclusive punk with a non-linear musical direction designed for explosive upward action and will shattering hypnotism. If you haven't dazed up and done yourself in with these yet, please get down with them immediately. Don't be chumped. Everything about this record is different and perfect. See you soon!? Thank you.

FRAMTID - Defeat Of Civilization LP - Black Water/La Vida Es Un Mus/Crust War
-"Japan has long been heralded as thee place to see and hear raging yet earnest musical craftsmanship." Even if you don't agree with that statement (which may or mat not have been printed in a good citizen's handbook), FRAMTID is most certainly an argument for it. The drumming alone on this record is better than most band's entire catalog of offered sound. Note: copying FRAMTID's blistering natural state is not recommended. We expected to like the tortured pummel and head twisting megawave but holy hell it blew all of us out of our trees. Incredible. Consider our civilization defeated.  Thank you.

CONDITION - Bombed Out 7" - Rust & Machine
-Just another D-Beat record to be ignored...WRONG!. CONDITION is the new face of genre perfect madness and bar-raising brutality. And they look good doing it too. Chains. Tattoos. Supple warming bass tone. Full rich guitar sounds minus the gratuitous noisy feedback crutch. Tasteful D&B from a guy with real dreadlocks and the sweet ginger tones of a leg-breaking-beer-throwing wild-ass. We are charmed to the last drop. Thank you.

BONE SICKNESS - Alone In The Grave LP - 20 Buck Spin
-Alone In The Grave thrashes and kills like a punk record but is not a punk record. It's a death metal record. A real death metal record. Not one that sucks bananas with lots of tech tricks and triggered nonsense. Just solid raging Autopsy meets Terrorizer styles. Not to mention a singing drummer! You know we like that. We wish all current metal bands had the balls to sound real like these guys. BONE SICKNESS is no fucking wimp. Thank You.

WOLF EYES - No Answer-Lower Floors LP - De Stijl
-On their 900th release, WOLF EYES cleans the noise clock yet again with a more pared down soundtrackish approach. Lick the speakers, you can almost taste the dirt on the basement floor. It's hard, uneasy and unfinished yet dense enough to hold up the entire shack for a thousand years. The secrets are buried beneath the bodies. Do the big dig, there's something special here. Still can't put our fingers in it but it hits just right every time. Thank you.

PRIMITIVE CALCULATORS - The World Is Fucked LP - Chapter Music
-If you didn't already know PC was one of the best drumless keyboard punk noise weirdo hybrids of the 80's then they gave us all another chance to do that dance. Oddly enough this recording is the first they've done in a proper studio. All others were recorded live. And still destroyed! How many bands ever did that? Screamers? Yep. None other that we can think of. In a sea of lukewarm teenage new wave/industiral/goth rehash these guys made an ugly pumping muscular collection of ear destroyers palatable for all age groups with a taste for the indecent. Thank you.

PLEASURE CROSS - s/t CS - End Theory
-The only tape release to make the cut this year but rest assured that this is the real grindcore you've been looking for. Angry lives ground by full grown adults with jobs and responsibilities who are not quite "too old for this shit" just yet. We look forward to seeing what they release next because we know it will knock your block off and repurpose the chubby tepid leftovers into fuel and party favors. This cover art should win some kind of award. Two KKK's kissing? Genius. We grant thee a championship belt encrusted with jewels, gold and bragging rights. Thank you.

KREMLIN - Drunk In The Gulag 12" - Beach Impediment/Bad VIbrations
-We swear we saw this band wear a beret on stage. And sunglasses at night too. That's what the punks do these days, right? Whatever the fuck they want, right? It shows hard on this 130 grammer. A scalding cache of nasty Canadian roughcore tunes easy to groove to but hard to pigeonhole. No gimmicks, no fuss, just punx. Fuck off squares, get down to KREMLIN (posthumously)! Thank you.

GAG - This Punk Shit Is Cool But I Hope I Am Rob Zombie When I'm 28 12" - Bedside
-Trenchmen states-wide beat themselves ugly to the antics of our northwest's beloved. Big riffs and smashed noses can always be counted on. And that is just the live version. Recorded it's just as visceral and unattractive. It's a good thing this is only one-sided as most would not be able to handle two. Lucky for us we have thick skin and hard knuckles. If we've learned anything from these manglers it's to never let our guard down. GAG goes ham. Bet. Thank you.

Posted by El Presidente at 12:43 PM Links to this post

MK weighs in on lists and smartness

Just to be a smartass and to be a proper label helper, our boy Martin set about doing his own top 10 list for the year. Probably on company time too. That son of a bitch. Bear with him... 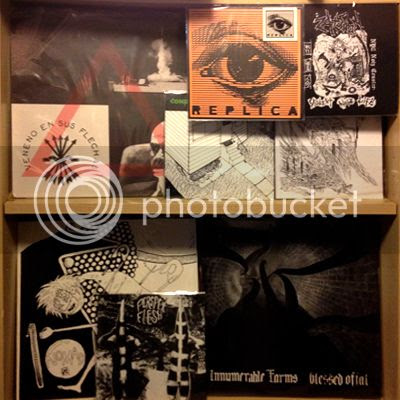 CONDOMINIUM - Carl 7" - Sub Pop
-They let me have a list so in an act of sheer diplomacy (which is something you Yanks know nothing about!) I'll spit all the things we listened to in the office that they didn't put in their stupid list. Yes, FRAMTID rules and UNA BESTIA is the best(ia) blah blah blah. Since I'm new to this jingo I went with a load of domestics and only a coupla overseas slabs. I assume Carl is one of CONDO's friends with a big attitude and slighty bigger codpiece. Smooth move putting the titular track on the flip side too. These blokes came through a while back and just leveled the room. Wot a band! Birmy's got nothing like this. Cheers cunts.

ZATSUON - Violent Noiz Life 7" - Distort Reality
-Jake used to play in a non-fashionable group called NERVESKADE that was one of my favorite ILR releases from a couple years back. ZATSUON as far as I'm told is PERDITION people and Jake doing what PERD-people and Jake do best. And that is go apey and make ferocious maximum energy noize-not-music. This banga is fucking mental. Cheers cunts.

NUDES - Sister 7" - Inimical
-Seattle's stage pissing creeper scums recorded their nasty on the outskirts of civilisation. And brother, it is a mere representation of NUDES' live show. That is what really earnt them the spot on this list. Incredible group. The overlords tell me there is a 7" doing ILR soonish. Cheers cunts.

NOMAD - Kill Yourself LP - Toxic State
-Some more of that noizy shoestring headband silliness but ripped out and herniated beyond the norm. I imagine their shows are a sight to see. Especially the ones around ground zero... I mean Freedom Plaza, twat. A circle spank of wild mohicans sniffing glue and cutting rugs. I like that visual. We will see them soon and jerk out... Cheers cunts.

PERSPEX FLESH - Heavy Steps 7" - Video Disease
-Leeds has it's bricks and it's WHO/HERESY live albums but it also has PERSPEX FLESH. A gloved tough punk concoction with the willingness to go beyond the acceptable. Had a chance to catch this act before I moved and it was top notch entertainment. Better than most of the other swill that makes the circuit. I do sense a bit of cheese so they'd best be careful with future moves. Cheers cunts. (-editor's note: The cheese has not been sensed)

REPLICA - Strings 7" - Prank
-Ladies of colour and the hirsute male machine make strange thrashy jigs. Up with people. Get free. Not to be missed in the live arena. Cheers cunts.

INNUMERABLE FORMS/BLESSED OFFAL - Split LP - Hell Militia
-It doesn't take much wit to get that FORMS are the real destroyer sound. Brutish manhood and stylish massive. This is the other best death metal band alive. I'm not just saying that to get points with Jensen (since he plays guitar in the band but I do think he didn't include this record on their list because of his involvement even though he didn't actually play on this recording, wotever, who cares?) but I could use some points as I seem to always be on their shitlist for some bloody reason. I do the best I can. Sometimes I forget to put things in the cartons. Sometimes I stay home and listen to INNUMERABLE FORMS instead of going in to work. Cheers cunts.

GLAM - Veneno En Sus Flechas 12" - La Vida Es Un Mus
-I imagine these boys to be very attractive and adept at drawing the sexy types. They make foot lickin' fuck punk. Or at least that's wot I do to it. Cheers cunts.
Posted by Iron Lung Records at 12:52 PM Links to this post

The boys have put an entire live set from Birmingham (the home of our very own Martin Ken) featuring many soon to be LP songs on their Low Recordings soundcloud page. Take the long stroll off the short pier...

Posted by El Presidente at 2:30 PM Links to this post